Posted by on 12/20/2019 to Hanukkah
In Temple times, crafted from gold, the menorah had seven branches- instead of the nine used today - branching out from the Shamash to host eight shimmering lights. Our menorahs today traditionally sit in a window, lit at night, for those passing to see the celebration in progress. 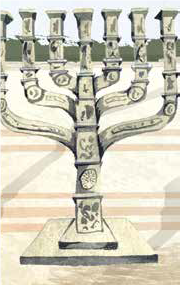 December comes during the summer in Antarctica. This means that it’s part of six months of constant sunlight. For those who celebrate Hanukkah, recreating the warm celebratory glow of the menorah becomes a concern. In Esther Susan Heller’s book, “Menorah Under the Sea”, she follows marine biologist David Ginsburg to Antarctica as he finds an unusual way to make Hanukkah feel like Hanukkah.
Stationed at the McCurdo Station in the frozen tundra, Ginsburg spent five months studying sea urchins along the frigid ocean coastline. Ingenuity and creativity allowed him to find a solution to the questions, “How can I celebrate Hanukkah when there is no nightfall? Can I light a menorah while the sun is still shining?”
On the first night of Hanukkah, Ginsburg was studying the sea urchins and got an idea watching them move slowly to conserve energy. He started gingerly gathering them and arranging them on the ocean floor. Soon enough he had crafted a living menorah, using starfish as flames.

As he and his team took a photo before the makeshift menorah floated away, Ginsburg felt that special glow that only a Hanukkah menorah can give.

What have you’ve used to make a Hanukkah menorah?

#10yearanniversay #HanukkahwithKarBen #SeaUrchins #Antarctica #Hanukkah2019
To learn more about Antarctica or animals of the deep sea, check out these Lerner books:
Journey into the Deep Ocean: Discover New Ocean Creatures
Learning about Antarctica
Share |
Previous Post
Next Post
Welcome to Kar-Ben's blog, a place for ideas and activities to inspire, entertain and educate young readers and their families.