Most often, despite the seeming collaboration, authors and illustrators of children’s books never meet or work directly with each other. Even so, results that seem almost magical can be achieved in the final product. One very special book is An Unlikely Ballerina by Krystyna Poray Goddu (who is based in New York) and illustrated by Cosei Kawa (who is based in Japan), a great example of the interplay between story and image. Krystyna was curious about a unique element of Cosei’s art, and wrote to him to ask about it:

Krystyna: I am very curious about the miniature elements that appear like streams of sparkles on every page. At first glance they seem like a mix of vague shapes,  but when I look closer I see they are made up of very specific items: clock, tutu, stool, chair….I wonder about the significance of this artistic element.

Why do you choose to include these as part of every illustration? Do you draw each tiny image yourself and then repeat them? Or how do you create them? Do you choose specific items, or is it a random selection? They are so evocative and give such a distinctive look to the book. I am sure that someday soon a child will ask me about this aspect of your work, and I’ll love to have some kind of intelligent response!

And Cosei wrote back with a fascinating reply:

Cosei: Some people mentioned those tiny floating objects since now, but nobody asked about them. I am happy to answer your question. I call them "confetti."

Before illustrating the spreads, I drew lots of sketches of scene-properties in the background like flowers, furniture, clothes, sweets, accessories, and so on... Through those relaxing sketches, I start exploring the story and building the visual imaginary world. Most of them are not used in the main scenes and just a few survive. I micrify the buried idea-sketches and blow them off in the air. In the first spread, you may find a theatre, flowers, a table, an Arabian Lamp, a stature of Buddha, a door, a dress, a cat, and lots of other objects around the spinning Lily. They are alternatives of The Unlikely Ballerina. I think the confetti makes the book rich and unifies the spreads. I hope it helps your understanding.

See the images up close: 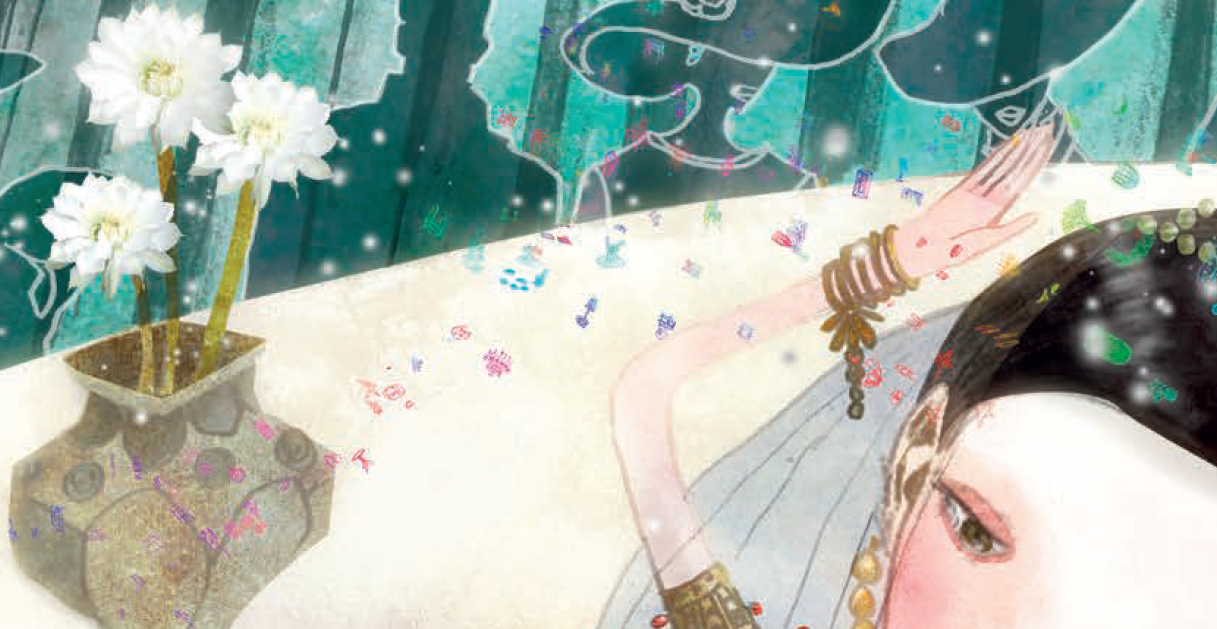 You may recognize Cosei's work in another Kar-Ben book, Rifka Takes a Bow, a fun book about a girl whose parents were actors in the Yiddish Theater in New York in the early 20th century. Cosei employed the same magical-seeming "confetti" technique. 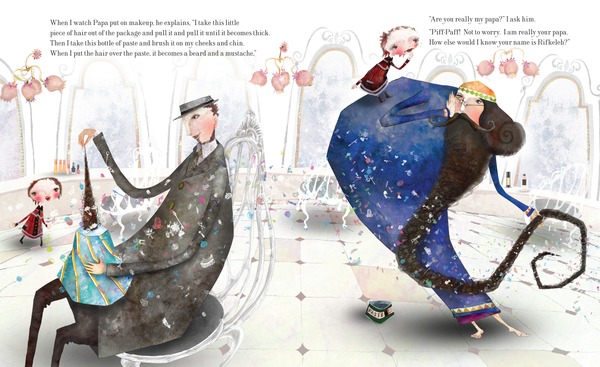