Yiddish: Not just a once-upon-a-time language

For the children and grandchildren of Central and Eastern European Jews, Yiddish is the once-upon-a-time language of the ancestors that gives expression to centuries of culture and history.

Life for Jews in Central and Eastern Europe prior to the mass emigration of the 1800s and early 1900s was, for many, characterized by poverty, instability and persecution. Survival was a way of life, symbolized in popular culture today by Sholem Aleichem’s famous fiddler on the roof. How hard is it to make music while balancing on a rooftop? Yiddish is a language full of riddles, ironies, and the mingling of the sweet with the bitter.

Rozhinkes mit Man­dlen (Raisins and Almonds) is a well-known Yiddish lullaby. The lyrics describe a small white goat selling the fruits and nuts that were considered a luxury in those days.

The small white goat appears throughout Yiddish stories, songs and art. The goat appears in the Passover song “Chad Gadya”and in Marc Chagall’s paintings, where it sometimes smiles, wears clothing, and plays the violin.  It is said that even the poorest shtetl family kept a goat for its milk, and on cold nights the goat would be allowed to sleep inside the house. It is easy to imagine affection blossoming between children and a gentle creature not much bigger than themselves.

It is just such a friendly and clever goat that appears in Raisins and Almonds, Susan Tarcov’s reimagining of the traditional lullaby. A mother explains to her daughter that the noises under her bed come from a little goat’s store. The girl is not afraid.  Along with her animal friends, she imagines all the wonderful things the little goat might be selling.

To read the words of a language is to be immersed in the culture of its people. Kar-Ben’s My First Yiddish Word Book is a perfect entry into Yiddishkeit. You won’t find the humble goat in this book, but you will find everyday words for home, school, and the store. Most people don’t keep goats today anyway. 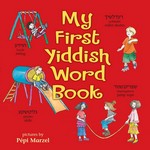