A pot of soup or stew simmering on the stove can make the whole house feel cozy on a cold winter day, which explains why January is National Soup Month.

In 1765, a French entrepreneur named Boulanger opened the first modern restaurant. On Boulanger’s menu soup - or more specifically, meat-based bouillons - intended to restore a person’s health, which Boulanger successfully marketed as an antidote to exhaustion.

The sign above his door advertised bouillons restaurants, which literally translates to “restorative broths.”  The origin of the word “restaurant” is a healing soup.

The best food feeds your soul as well as your body. For the kids in The Cholent Brigade, nothing makes a hurt neighbor feel better than a hot bowl of homemade stew.

Looking for inspiration to make your own soup or stew? Check out the stories and recipes in Tasty Bible Stories and Passover Around the World. 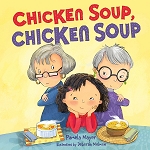 Tasty Bible Stories
Buy the eBook
Print Book Not Available
Welcome to Kar-Ben's blog, a place for ideas and activities to inspire, entertain and educate young readers and their families.