Moving from a familiar place to a new one in the hopes of a different life can be a difficult concept for children to understand. Immigration is very much a part of the story of the Jewish people. Books can convey the anticipation, hopes, and dreams of immigrants, as well as the trepidation and challenges. Maybe most importantly, picture books can help teach young children kindness and empathy toward newcomers, and appreciate the bravery of people in their families and communities who have made such a big change. 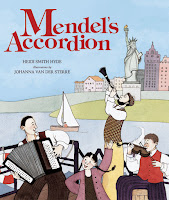 A boy finds his great grandfather's accordion in the attic and with it the history of klezmer music, his family’s move to America, and the role the old accordion played in Jewish life through the years. The story shows how many klezmorim fled Eastern Europe and joined the massive immigration to America as a result of pogroms and economic oppression in the late 19th and early 20th centuries. The story is a great reminder of how things—like an accordion—can tell stories, and how music can, too! 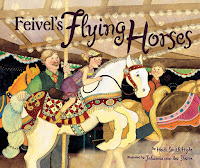 A loving father carves carousel horses that represent members of his family as he saves money to bring them from Europe to America. This book is a work of historical fiction based on the stories of Jewish woodcarvers who came from the Old Country and turned their talents to carving carousel horses on Coney Island. It may surprise many readers to learn that some of the most beautiful carousel horses in America were carved by Jewish immigrants. With the emergence of amusement parks such as Brooklyn’s Coney Island, the carousel industry flourished in the late 1800s. This coincided with a wave of Eastern European Jewish immigrants who came to America’s shores in the late 19th century to escape persecution. The newcomers brought with them many skills, among them woodcarving, and we can still see their handiwork in places expected—like bridges and buildings—and less expected, like carousels. 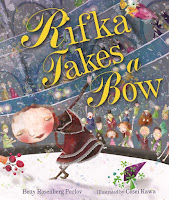 A slice of immigrant life on New York’s Second Avenue, Rifka Takes a Bow is a unique book about a vanished time and a place--the Yiddish theater in the early 20th century--made real through the telling of the true-life story of the 96-year-old author as a little girl.

Between the late 1800s and the early part of the 20th century, New York’s Second Avenue was home to over a dozen Yiddish-language theaters that performed for the many Yiddish-speaking Jewish immigrants who lived in the nearby Lower East Side tenements. They presented plays on themes such as the conflict between Eastern European parents and their American-born children, and the tensions between Chasidic and “enlightened” Jews, and adapted works of Shakespeare and other world playwrights to give working class Jews a chance to partake of high culture. 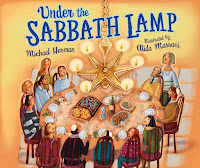 Under the Sabbath Lamp

When Izzy and Olivia Bloom invite their neighbors over for Shabbat dinner, everyone is shocked to find out that the Blooms don't have Shabbat candles. Instead, they have something much more unusual: an antique Sabbath lamp that's been passed down from generation to generation. How did the Sabbath lamp get to America? That's a good story . . . the pieces of the lamp were each brought by a different member of the family when enough funds for passage had been saved. Finally, the family was reunited and the special lamp was fully reassembled. This story will help young readers understand how heirlooms can tell family histories. 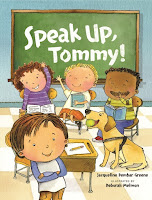 Moving from Israel to America is hard for Tomer, who goes by Tommy in his new school just because it is easier. Tommy’s classmates tease him about his Israeli accent and his poor English skills, but his knowledge of Hebrew makes him a hero, leading to a unique friendship with a policeman and his specially-trained dog. A contemporary story of moving to a new place, young readers can learn the important lesson of empathy for others. 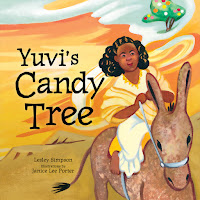 Yuvi’s Candy Tree is a fictional story based on the true story of Yuvi Tashome. Yuvi, a little Ethiopian Jewish girl, escapes the poverty and terror of Ethiopia in the early 1980s with her grandmother, arriving in Israel where the orange trees with their sweet fruit fulfill her dream to live in a place where "candy trees" grow. Yuvi Tashome escaped from Ethiopia to a Sudanese refugee camp when she was a little girl. She was later airlifted to Israel as part of Operation Moses, one of several Israeli rescue operations of Ethiopian Jews in the 1980s and 1990s. Israel’s Law of Return gives Jews of all countries the right to return to Israel. The Ethiopian Jews viewed Israel as their home, and they risked their lives to return.