Putting Down Roots on Tu B'Shevat

“Putting down roots” can mean one of two things, depending on whether you are a plant or a person: to take nourishment from the soil through roots, or to settle down in a particular place.

Tu B’Shevat, the New Year of Trees, is celebrated in every country where Jews live because the Jewish people have put down roots in every corner of the world. Jewish life has been shaped to an extent by the various landscapes where Jews have built their homes and raised their children.

Pavel and the Tree Army tells the story of how some Jewish immigrants put down their roots in the United States. During the Great Depression, President Roosevelt saw that work in crowded cities was scarce but that conservation projects in more remote areas needed laborers. The Civilian Conservation Corps was born. The work was physically demanding, but it came with plenty of fresh air, room and board, plus wages. 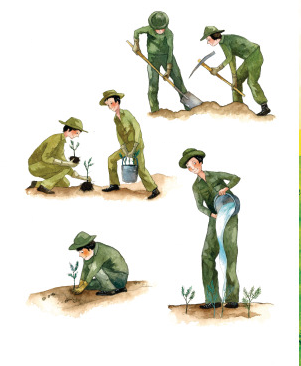 Roosevelt’s “Tree Army” planted an estimated three billion trees between 1933 and 1942. In fact, we owe much of today’s state park infrastructure to the labor of these men.

Many first-generation Americans participated in the program, including thousands of Jews like Pavel. For new Americans, it was often their first true connection to the land of their new country, United States. They were literally helping to build the country from seed and soil.

Putting down roots in every sense.

Tu B’Shevat is a time to remember our connection to the earth. Think about the ground below you. How deep are your roots? How does that earth nourish you, and how will you take care of that earth?

Share |
Previous Post
Next Post
Pavel and the Tree Army
Select Options
Welcome to Kar-Ben's blog, a place for ideas and activities to inspire, entertain and educate young readers and their families.