In 1995, when my boys were 11 and 14, I purchased a lovely book called Eight Nights, Eight Lights: Family Values for Each Night of Hanukkah, compiled by Rabbi Kerry Olitzky. It contained short inspirational passages to be read aloud as part of the candle-lighting ceremony. Some sections were written by modern rabbis. Others came from older Jewish texts. But each one provided a meaningful moment of reflection which added to our Hanukkah celebration, making this family time together more than just a gift-giving event.

My favorite paragraph—one I was sure to read aloud to my teenage boys each year—shared the story of a college student who revealed the reason why she chose not to turn to drugs or drinking while so many of her friends had. She credited the experience of celebrating Hanukkah while everyone around her celebrated Christmas. Doing something different at the winter holidays made her feel comfortable in taking her own path in other social situations.

Even after my boys left home for college, my husband and I continued to use Eight Nights, Eight Lights for our Hanukkah candle lighting ceremony. The material was just as appropriate for adults as for teenagers. But it wasn’t right for families of young children. Year after year, I would say to myself. “Young families should have a book like this to enhance their Hanukkah experience. They need something on the comprehension level of an elementary school age child and easily read aloud.”

It was an idea I longed to pursue but somehow didn’t get around to until 2015, when I began working on a series of short poems about Hanukkah. The poems incorporated both the story of Hanukkah and the rituals of candle-lighting, such as how the candles are lit by the shamash, the helper candle. The Fourth Night poem is a sample.

Later, I wrote reflections to accompany each poem. On the fourth night of Hanukkah, parents can read the following reflection and talk with their children about community helpers. Perhaps, families could decide to take action after their discussion, such as writing a letter or giving a gift to someone who deserves recognition.

On the seventh night, the poem and reflection explain the construction of a traditional menorah—how all the lights commemorating the Hanukkah miracle should be level with each other—and how this should encourage us to think about the value of equality in our diverse society. The fifth night focuses on the Hanukkah custom of waiting until the candles have finished burning before resuming housework or homework. With Light the Menorah: A Hanukkah Handbook, the reader is invited to consider and discuss a different topic on each night of the holiday.

Other poems in my handbook ask families to imagine the emotions of the Maccabees in the Hanukkah story. It wasn’t easy for the Maccabees to decide to go up against a much larger army, to be strong enough to say, “This is wrong and I will do something to help.” The Maccabees were willing to stand alone, to be like the first candle and brighten the darkness of their times. They were willing to go ahead with their celebration even though they did not have enough oil to last eight days. They chose to display faith, not fear, as the poem for the second night describes. 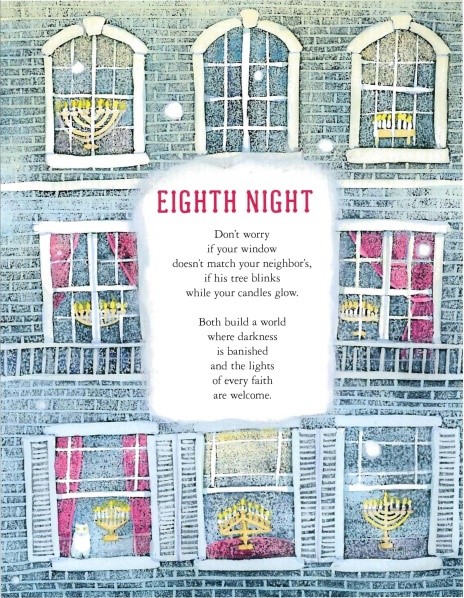 It is my hope that Light the Menorah! A Hanukkah Handbook will stimulate wonderful conversations and give you the tools to create new family traditions in the light of your menorah.

Jacqueline Jules is the award-winning author of many children’s books including four Sydney Taylor Honor books and two National Jewish Book Award finalists. Her books include The Hardest Word, Goodnight Sh’ma, Picnic at Camp Shalom, Sarah Laughs, Never Say a Mean Word Again, and Once Upon a Shabbos. She lives in Northern Virginia. Visit her online at www.jacquelinejules.com